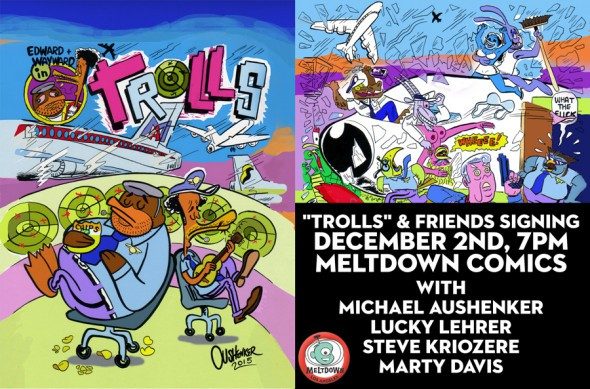 LUCKY LEHRER is the founding drummer of seminal L.A. punk band The Circle Jerks (on their classic albums “Group Sex” and “Wild in the Streets”) and a pioneer of the hardcore drumming style. He also wrote the foreword for “Trolls.”

STEVE KRIOZERE is the L.A.-based writer behind the AiT/PlanetLar graphic novel “Elvis Van Helsing.” He also took part as a writer on “The New Adventures of the Human Fly.” He currently writes on the new TNT series “Agent X.”

MARTY DAVIS is an Irvine-based comic book creator and the Annie-winning video game animator behind THQ’s “Ratatouille” game for Disney/Pixar. He wrote and drew the chapter on punk band Black Flag appears in Bloomsbury Press’s “How to Write About Music: A Compilation of the Best Music Writing from the 33 & 1/3 Series.” He is currently prepping the graphic novel “FUME!”