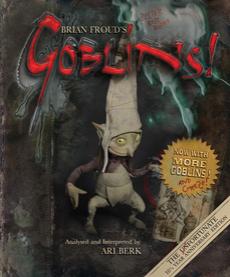 The bestselling team of artist Brian Froud and scholar Ari Berk have continued their exploration of the goblin realm, with a new and noxious version of the world-famous Goblins. For the uninformed, goblins are those maleficent creatures who cause all manner of havoc in the human realm. Now, thanks largely to Froud’s and Berk’s continuing carelessness, the viscid and largely nonsensical NEW volume has been unleashed on an unsuspecting public.

Among its pages are new letters of apologies and disclaimers complete with new, never-before-seen goblin art; a list of Gargle’s new titles, grants, entitlements, and responsibilities; and, sadly, much more! Also included is an envelope containing a new talisman that is guaranteed to ward off goblins.

Brian Froud is an award-winning illustrator, author, and faery authority. With his wife, Wendy, he has written Brian Froud’s Faeries’ Tales and Trolls. He is also the author of The World of the Dark Crystal and The Goblins of Labyrinth. He lives in Devon, England.

Colin Solan - January 21, 2021 0
TalentTalk offers an online chat with Dave Gibbons on Monday, February 22nd! Click here to purchase... Save $5 off your Talk when you use the promo code THANKS5. Dave Gibbons...