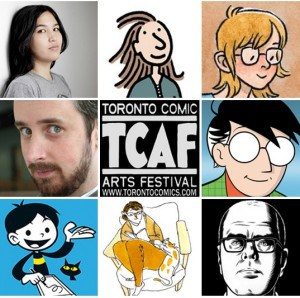 Announcing the Toronto Comic Arts Festival 2015! Over 300 cartoonists from Canada and around the world are on their way to Toronto this May, to celebrate the very best in comics, graphic novels, bandes dessinées, and manga! A week-long Festival of readings, launches, and art events culminating in a massive, FREE two-day exhibition centered at Toronto Reference Library, May 10 and 11, 2015!

For more than a decade, The Toronto Comic Arts Festival has showcased the incredible comics art being made here in Canada, and invited the attention of the international cartooning community. The 2015 programme continues to build on those successes, with an increase in programming, and a renewed focus on Canadian cartoonists from coast to coast!

TCAF 2015 will welcome a remarkable array of authors! Highlights from the author guests include:

Charles Burns: Creator of Black Hole, considered to be one of the most important graphic novels in the Western canon, Burns will be at TCAF to celebrate his recently completed new graphic novel series X’ed Out (Pantheon Books). Burns will also illustrated one of the official posters of the 2015 Festival, to be revealed.

Eleanor Davis: An outstanding cartoonist and editorial illustrator (The New Yorker, New York Times), Davis’ recent graphic novel release How To Be Happy (Fantagraphics) was widely lauded as one of the best graphic novels of 2014, and TCAF is thrilled to welcome this her back to Toronto for the 2015 Festival.

Gurihiru: This dynamic cartooning duo (working under one pen name) hails from Tokyo, Japan, and is beloved in North America for their original graphic novels set in the universe of Avatar: The Last Airbender (Dark Horse). They have also created work for Marvel Comics, Disney, and an array of independent illustration work.

Lucy Knisley: A long-time supporter of the Festival, Knisley’s memoirs and travelogues are well-loved across the continent. Knisley attends as a Featured Guest in 2015, in support of her new travelogue/graphic novel Displacement (Fantagraphics).

Scott McCloud: Creator of the essential comics text Understanding Comics, TCAF will welcome McCloud back to Toronto in support of his acclaimed new graphic novel The Sculptor (First Second Books).

Barbara Stok: Hailing from The Netherlands, Stok has an impressive collection of graphic novels to her credit. TCAF is happy to welcome her as a Featured Guest of the Festival in 2015, in conjunction with her debut English-language graphic novel release Vincent (SelfMadeHero), an important and critically-praised biography of Vincent Van Gogh.

Chip Zdarsky: Hometown favourite and emerging international superstar Zdarsky (a.k.a. Steve Murray) is welcomed as a Featured Guest for 2015! Best-known for his ground-breaking comic series Sex Criminals (with writer Matt Fraction), spring 2015 will see the launch of his new series Kaptara (Image Comics) with fellow Toronto illustrator Kagan McLeod, and a relaunch of Marvel Comics’ Howard The Duck.

And these are just the first nine featured guests among the more than 300 Canadian and International cartoonists participating in the 2015 Festival.

Featured guests will continue to be announced through February and March, with special guests from France, Italy, Germany, Japan, and the U.S. and Canada still to be revealed!

TCAF 2015 will also feature several programming spotlights, including a special tribute to esteemed Canadian graphic novel published Drawn & Quarterly, on the occasion of their 25th Anniversary.