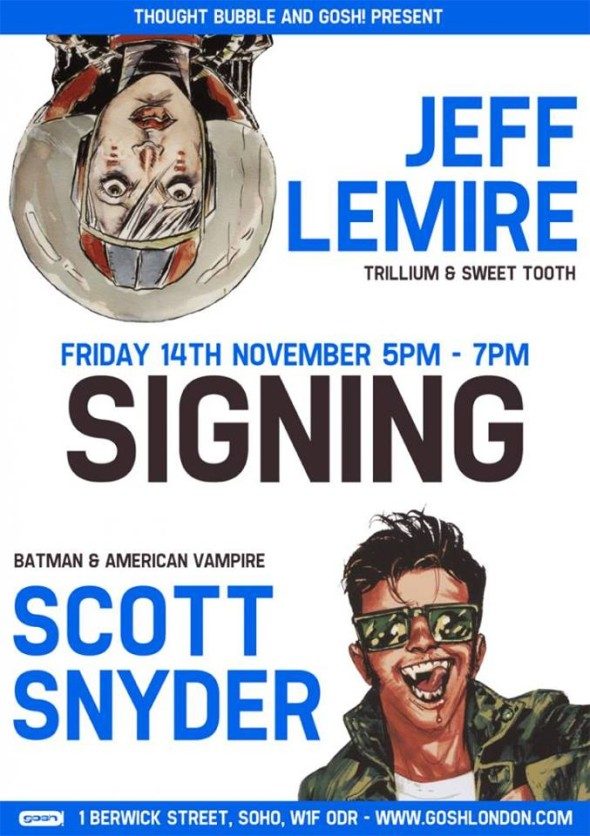 Scott Snyder and Jeff Lemire appear at Gosh Comics for a signing on Wednesday, November 14th from 5:00 – 7:00 PM. Presented in conjunction with Thought Bubble.

Since bursting onto the comic scene in 2009 Eisner and Harvey award winning Scott Snyder has written for both Marvel and DC; working on well-loved titles including Iron Man, and The Human Torch. Scott’s current work on Batman Eternal is particularly good but it’s his creator-owned work with Vertigo (American Vampire and The Wake) comics that’s really caught our attention.

Eisner and Harvey award nominations have also made their way over to the second creator of the evening, Jeff Lemire. If the name seems familiar it shouldn’t be a surprise. He wrote that comic. You know the one? Children born with horns and snouts and hooves and stuff. Not content with creating his own immersive and believable worlds (Essex County, Sweet Tooth, Trillium) Lemire has also written for DC comics with impressive runs on Animal Man, Justice League Dark, and Green Arrow to name a few.

Both creators will be with us signing copies of their books between 5-7pm on Friday the 14th of November. There’s going to be a 3 item limit on the night so choose carefully! If you don’t already have the book you’re after don’t worry; we’ll have a selection of their work available on the day. If you’re unable to make it to the event and there’s a specific book you’d like us to have signed for you then get in touch via info@goshlondon.com and we can make those arrangements.