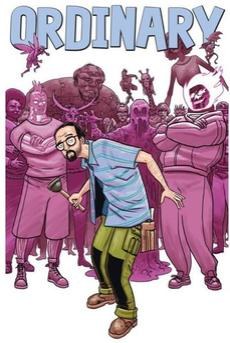 Rob Williams, Ben Oliver, and Simon Gurr appears for a signing of ORDINARY, the graphic novel, and AUTHORITY, HUMAN ON THE INSIDE at the Forbidden Planet Bristol Megastore on Saturday 1st November from 1 – 2pm.

For ORDINARY, Imagine a world where everyone has superpowers. That is, except you. You are the same old turgid, miserable, lonely loser, you’ve always been. What’s needed is a return to normality, to devolve back from Superhuman to just human – and there’s only one man for the job: down-at-heel, divorced New York plumber, Michael Fisher.

The AUTHORITY, Earth’s last of defence, have performed God-like acts in their defence of the planet, whether defeating ancient gods or fending off inter-dimensional invasion forces. But these brave acts haven’t always endeared them to many in power, particularly in the United States. The President, tired of being embarrassed by what he views as a bunch of costumed freaks, sets a plan in motion that could very well destroy the Authority from the inside — a plan so cunning and unexpected, it’ll shake the Authority to their very core.