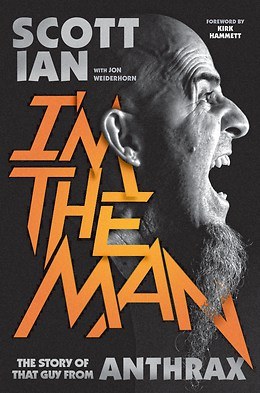 Scott Ian, guitarist of Anthrax, appears at Book Revue on Monday, October 13th, 2014 at 6:00 pm to sign his new memoir, I’m The Man: The Story of that Guy from Anthrax.

The long–awaited and vastly entertaining autobiography of Scott Ian, a founding member of legendary, groundbreaking, and influential thrash–metal band Anthrax.

In this fast–paced, humorous, and revealing memoir from guitarist Scott Ian—the leader of a band that proved brutality and fun don’t have to be mutually exclusive—Ian tells his life story, starting with his upbringing as a nerdy Jewish boy in Queens who had his first musical epiphany when he saw The Who on television. Not long after that, he saw KISS at Madison Square Garden and realized what he wanted to do with his life.

I’m the Man covers Ian’s dysfunctional home life and his escape through the turbulent world of heavy metal. It also chronicles the complete history of Anthrax, from the band’s formation to their triumphant performance at Ian’s beloved Yankee Stadium on the Big Four Tour with Metallica, Slayer, and Megadeth.