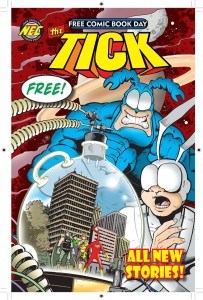 New England Comics, the largest and premiere comic retailer in Massachusetts, will be one of thousands of comic book retailers around the world celebrating the comic book art form on Saturday, May 3rd with Free Comic Book Day!

A FANTASTIC DAY OF FUN FOR ALL!

Millions of comic books will be given away by participating stores, on Free Comic Book Day, Saturday May 3rd, introducing thousands of fans to the wonders and thrills of comic books! Simply stop into one of the 8 New England Comics locations on Saturday May 3rd and you can choose from for FREE comics featuring GUARDIANS OF THE GALAXY, JUSTICE LEAGUE, THE SIMPSONS, AVATAR THE LAST AIR BENDER, TRANSFORMERS/GI JOE, TEEN TITANS GO!, ROCKET RACCOON and dozens more!

” The amazing array of stories that are being published right now is just off the charts. You have everything from classic super hero comics to the ever expanding genres of horror, crime, and adventure in the market place now :and a continuing selection of comics based off popular video games and movies too. The quality of the art and writing is the best it’s been since the start of the new millenium.” said Nate Machado, Manager of New England Comics.

Now in its fourteenth year, Free Comic Book Day has proven to he an unquestionably massive success, spreading the word that comics are an incredible form of entertainment. “If you haye never indulged in a comic book, or simply slipped away from reading comics for a while, please come join us at New England Comics, we have something for nearly anyone. I guarantee you will find something to entertain and excite your imagination.”

“New England Comics wants to spread the word that comics can compete with movies, video games, and any other term of media in the year 2014, we were here before all other modern media,and we as an industry, are producing some the BEST entertainment on the planet,” Machado continued. “Comic books and graphic novels are where some the most cutting-edge and ground-breaking work is being done. Just look at the success of Walking Dead: the bestselling graphic novel series torthe last 5 years running!” Comic Books have nearly single–handedlv reaped billions in profits for the large movie studios, and with GUARDIANS OF THE GALAXY movie opening this August 1st that trend should continue. “The first weekend of May is going to be a HUGE daye in the comic book world.”

Regular updates, information about Free Comic Book Day, and a list of participating publishers and their free comics are all online at www.freecomicbookday.com .
NEW ENGLAND COMICS EVENTS FOR FREE COMIC BOOK DAY:

Allston NEC:
Brian Connolly creator of local comic book Nothing Mattress who is also featured in the Weekly Dig

Brockton NEC:
Frank Tieri: Comic Author 11:00 AM – 6:00PM
Credits: Wolverine, Deadpool, Batman Underground, Marvel vs Capcom Video Game, Ultimate Spider-Man cartoon show, Deadpool Wedding issue, and upcoming Savage Wolverine #20
Scott Wilde: Caricature Artist; Have yourself done up as a caricature of the hero of your choice by local talented artist Scott Wilde
Cosplay: Have your picture taken with Batgirl and another surprise hero as yet to be named.
Be Captain America: Have your photo taken as Captain America.
Free Heroclix Demo

Malden NEC:
Writer/publisher George O’Connor and artist Griffin Ess, creators of Homeless Comics’ graphic novel HEALED and the one-shot, stand-alone comic book BABY.
Also appearing in store that day will be writer/artist James Biggie, creator of the online comic (now available in print as a graphic novel) ROBOT GOD AKAMATSU and cover artist on the IDW title GI JOE.
As a special treat the ASTOUNDING ALTIERI will be performing acts of prestidigitation, legerdemain and sleight of hand throughout the day.

Harvard Sq. NEC:
Liz Prince, indy publishing goddess, Will You Still Love Me If I Wet the Bed?, Alone Forever

To find out further updates on what is happending at all 8 New England Comics locations go to www.newenglandcomics.com