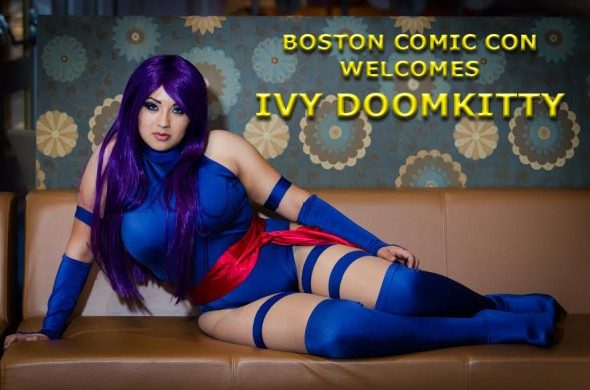 Boston Comic Con welcomes IVY DOOMKITTY to our 2014 convention! A champion of cosplay, Ivy will be this year’s guest judge of the annual costume contest, currently scheduled to be held on Sunday August 10, 2014. Additionally, she will host a Cosplay 101 panel to answer questions for anyone interested in getting into the hobby and doesn’t know where to start. Ivy will also be on hand all weekend to sign autographs and take photos with her legions of fans. Plus some surprises to be announced in the coming months! Tell your friends!

Online ticket purchases are available at the link!

About Ivy Doomkitty:
Ivy Doomkitty is an International Costume Designer/Cosplayer, Host, Artist, Gamer, and Figure Model for comic book artist/writer, Frank Cho, based in Los Angeles. Ivy has been attending conventions for many years, before deciding to take the plunge by showing her fandom through cosplay.

She now uses this new found passion to create her own costumes and use them to bring to life her favorite characters from gaming and comics as well as creating a positive impact in the cosplay community. She strives to show others in the community that you can do something you love, regardless of gender, skin color, sexual orientation, body shape/size, etc.

Ivy was recently the Featured Cosplayer on the Premier Episode of the webseries, “Cospladies”, a short documentary on the trials, tribulations, and love of cosplay. Ivy is also a member of the West Coast Avengers/Avengers Initiative, taking part in charity events in Southern California.

Ivy heavily promotes the art of Cosplay at every convention that she is a guest at, including participating in panels, judging the costume contest, and meeting many fans that are interested in starting in the craft. In the past, she has interviewed some incredible talent, including Stan Lee, Lou Ferrigno, Arthur Suydam, Michael Golden, and more. She has also written comic book reviews, in addition to presenting and hosting costume contests. Find more of her work at www.facebook.com/ivydoomkittyivy

About Boston Comic Con:
The Boston Comic Con is a 100% independently run comic book show committed to bringing the biggest and best comic creators to New England. Run by fans for fans, Boston Comic Con is not affiliated with any other convention tour or corporate interests. Hosting over 120,000 square feet of vendors selling comic books, toys, posters, trading cards, and other pop culture memorabilia, this is a destination event for geeks of any stripe. This year’s convention will be held Friday August 8th, Saturday August 9th and Sunday August 10th at the Seaport World Trade Center, 200 Seaport Blvd, Boston, MA 02210. For more information please go to our website at www.bostoncomiccon.com and follow us on Twitter (@BostonComicCon) and Facebook!