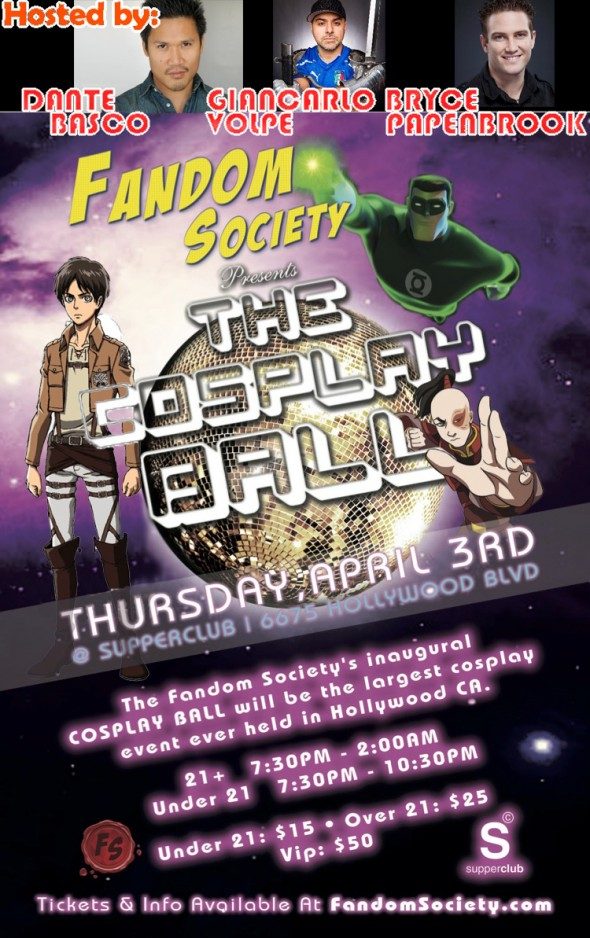 The Fandom Society’s inaugural COSPLAY BALL will be the largest cosplay event ever held in Hollywood, CA. This unique event allows fans who arrive early to meet their favorite stars from hit movies,TV shows, and internet series in a personal and interactive environment. The meet and greet event will be followed by an outrageous night of cosplay and special performances. Join us and meet your friends in fandom!

Tickets at the link!

So far we have two confirmed hosts, Bryce Papenbrook and Giancarlo Volpe. Bryce Papenbrook is a voice actor and has been in the roles of Eren Jaeger (Attack on Titan), Rin Okumura (Blue Exorcist), Kirito (SAO), Masaomi Kida (DRRR!), and is the voice of Makoto Naegi (SDR). Giancarlo Volpe was the director for Avatar: The Last Airbender and Clone Wars as well as the producer for Green Lantern: The Animated Series. And, of course, Dante Basco, the man behind the idea of Fandom Society. Dante Basco is best known as the voice of Zuko from Avatar: The Last Airbender, General Iroh from Legend of Korra, and Rufio from Hook.

What is Fandom Society?

The main idea behind Fandom Society is that everyone is a fan of something. Whether it be video games, anime, webcomics, comics, etc. someone’s a fan of something. Fandom Society is a way to meet new people within these fandoms and even to meet and interact with people you who would normally be behind a signing booth. The main goal behind Fandom Society is to break down that barrier between the fan and the content creators (because even Dante Basco can be a fanboy). We also want to show mainstream media what it is to be in a fandom and to be into cosplay (let’s pretend HoC didn’t happen).

Cosplay ball means… Cosplay! If you want to create an entirely new cosplay for this party alone, go ahead. Or if you want to recycle one you’re really proud of, do that too! We’re going to have a lot of coverage of this event so bring your best foot forward. The hosts will also be going around looking for the best costumes and you will be put front and center in a fashion show for the entire party to see. I don’t know about you, but that’s some motive to bring a great cosplay.

Now what are you doing? Go and buy your tickets and bring your friends too!