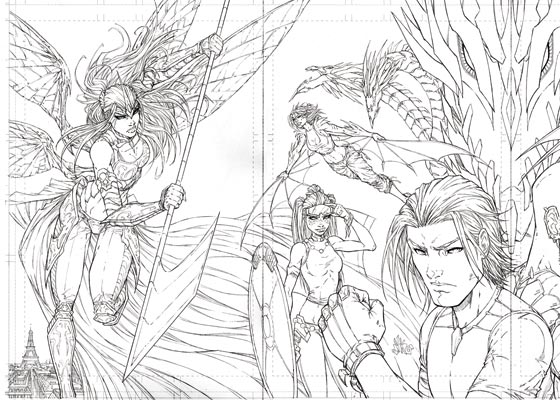 Marion is one of the hottest rising stars of the comic book industry. He has worked on a number of titles as monthly penciller on Extermination (Boom! Studios) and Fathom: The Elite mini-series (Aspen Comics). Marion is the current monthly artist for Soulfire (Aspen Comics).

Marion’s artwork is influenced by the school of Jim Lee and closely reminiscent of Michael Turner’s style. Marion is known for beautiful portraits of women and his tightly penciled pages.

The term “scan to black” in the comic industry describes the process of scanning finished pencils and then converting them digitally to black without the use of an inker. This process usually requires finished pencils to be tight, clean, and clear. The result are beautiful renditions that bring an elegance to the comic-illustration genre and reflect a recent trend in the industry.

Pushkin Creperie Bakery is located at 541 Myrtle Avenue near the campus of Pratt Institute (between Steuben and Emerson Sts., across from the Pratt Store).

This event is sponsored by the Brooklyn Art Review.

Colin Solan - July 7, 2020 0
Press Release: Since we can’t bring you Denver Pop Culture Con in person this year, we’re streaming some of the best programming from our 2019...