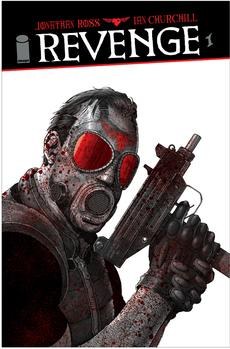 Writer JONATHAN ROSS and artist IAN CHURCHILL sign the first issue of the Revenge (Image Comics) mini-series at the Forbidden Planet London Megastore on Saturday 1st March from 1:00 to 2:00pm.

Griffin Franks was a joke in Hollywood. A washed up action-hero. Over the hill. Past it. A has-been. A barely-was. But now he IS The Revenger. He’s a star. His movie’s a hit. His latest wife is hot. He finally has everything he wants. Just in time for someone to take it all away. Forever. Starting with his face.

As well as scripting this great new title, Jonathan Ross makes his art debut – he has drawn the cover of the Forbidden Planet Variant of Revenge #1, with inks and colouring by Ian Churchill.

Needing no introduction, JONATHAN ROSS is not only a national celebrity and TV presenter but a lifelong comics enthusiast – who is building a new following of comic fans with his critically acclaimed work on Turf and America’s Got Powers!

IAN CHURCHILL has worked professionally in the comic book industry for 20 years. Debuting on Marvel’s X-Men titles, he went on to illustrate Cable, Deadpool, The Avengers, Superman, Supergirl, Teen Titans, Red Hulk, Richard Starkings’ Elephantmen and his own group of supernatural heroes The Coven. His creator-owned character Marineman, launched in 2010 and received an Eisner Award nomination for Best New Series 2010 and was shortlisted for the 2012 Stan Lee Excelsior Award.