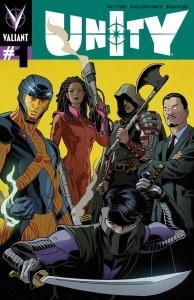 This September, Valiant is headed to Baltimore Comic-Con for a weekend packed with special guests, exclusive programming, and convention-only giveaways!

Be sure to stop by and pick up your copy of the UNITY #1 Preview Edition – an all-new convention-only comic book featuring the very first look inside UNITY #1 by Matt Kindt and Doug Braithwaite! The first issue of all-new ongoing series debuting this November, UNITY #1 is the perfect place to find out why Valiant is the most-talked about publisher in comics!

And, as always, Valiant will also have a one-stop selection of comics, trade paperbacks, hardcovers, and official Cinder Block merchandise – including t-shirts, limited edition prints, mugs and more – available for readers new and old!

Plus, no fan will want to miss Valiant Comics: The Road to Unity – Valiant’s Baltimore-exclusive panel presentation on Saturday, September 7th at 2 pm! Join an all-star panel of Valiant insiders for a must-see round of news and announcements about the most talked-about publisher in comics! Featuring creators J.G. Jones (Eternal Warrior), Barry Kitson (Harbinger, Bloodshot), Robert Venditti (X-O Manowar), and Jim Zub (Shadowman), alongside Publisher Fred Pierce and Chief Creative Officer Dinesh Shamdasani, find out everything you need to know about the massive repercussions of UNITY and what’s next for Valiant’s greatest heroes – only at Baltimore Comic-Con!