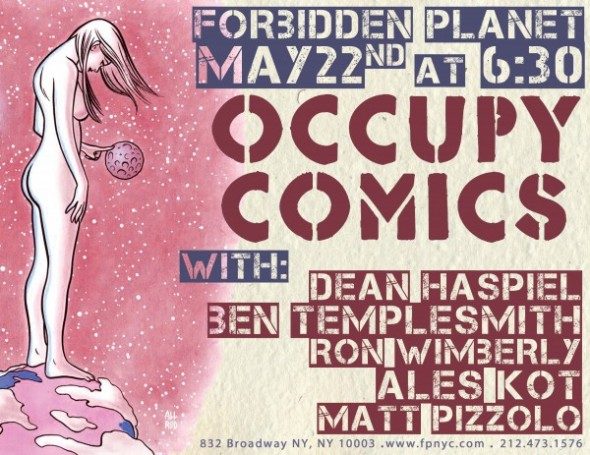 May 22nd marks the public release of the first issue of a wild and fascinating comic collaboration. Occupy Comics #1 will be on shelves and we at Forbidden Planet recommend everyone get it. This is not only a comic that features the likes of Alan Moore, Art Spiegelman, David Lloyd, Charlie Adlard, Marc Andreyko, Kevin Colden, Molly Crabapple, J.M. DeMatteis, Joshua Dysart, Brea Grant, Joe Keatinge, George Krstic, Joseph Michael Linsner, B. Clay Moore, Steve Niles, Laurie Penny, Matt Pizzolo, Steve Rolston, Riley Rossmo, Douglas Rushkoff, Tim Seeley, Simon Spurrier, and Ben Templesmith. It’s not just a time capsule of radical ideas/stories for/about change. And, most importantly, its not just quick way for some people to make quick and easy money like some other comic publishers that shall remain nameless. DC. This is a book about one of the most culturally significant happenings in this country in a long time and whether you agree with its ideals or not makes it no less poignant. So in honor of this achievement in the choice of medium we have decided to peddle we will be having a signing with Dean Haspiel, Ron Wimberly, Ben Templesmith, Ales Kot, and Matt Pizzolo on May 22nd at 6:30pm. Come get your copy and get it signed by all these artists and writers who created something larger than themselves about a movement that was bigger than anyone anticipated.All proceeds from the book’s sales go to current Occupy initiates such as Occupy Sandy and Strike Debt. Read comics that matter.