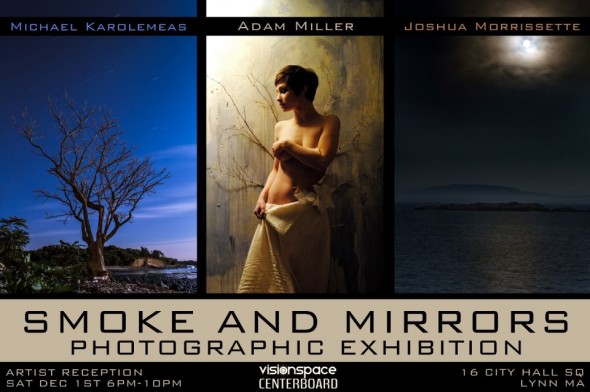 ZombieBomb creators Adam Miller, Joshua Morrissette, and Michael Karolemaes open an exhibition of art on Saturday, December 1, 2012 from 6:00pm until 10:00pm   This show brings together the work of three life long friends. Come celebrate their respective photographic visions, all under one roof for the first time anywhere. RSVP via Facebook!

Adam Miller – After more than two years away from the gallery scene, Adam has taken a break from traveling and working in the comic book field to revisit his roots. This show marks his return to the world of fine art. After focusing exclusively on photo for the  last year, “Smoke and Mirrors” is his first exhibit to solely feature photography.

Joshua Morrissette- Josh spent more than a decade perfecting his craft in the digital imaging and photo restoration fields. Recently, he has switched gears to concentrate on independent projects and personal work. “Smoke and Mirrors” will showcase the first new body of Josh’s photography since his leap into the freelance world.

Michael Karolemeas- A relative new comer to the art scene, Mike will make his exciting Gallery debut at the event. He has dove headlong into photography, concentrating on capturing the world at night, to give his unique perspective on our surroundings. Mike’s hard earned skills culminate in this year-end event, here, at “Smoke and Mirrors”.