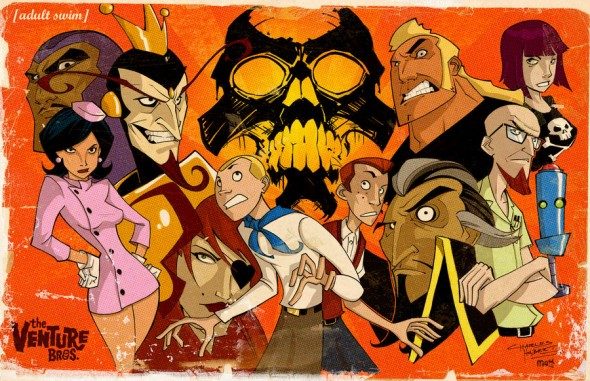 The Venture Bros show creators Jackson Publick and Doc Hammer, perennial Comic-Con favorites, will discuss their original series and answer questions that have been submitted by fans on AdultSwimPresents.com/NYCC.  Launched on Adult Swim in August 2004, The Venture Bros. is an inspired spoof of 1960s action cartoon shows such as “Johnny Quest.” The animated series follows the bizarre misadventures of the Venture family, which includes world-renowned Dr. Venture, his dimwitted sons Hank and Dean as well as Brock Samson, their bodyguard assigned by the government to keep an eye on the family who is then promptly forgotten by the Feds.

as they discuss their Adult Swim series Superjail! and preview never-before-seen footage! Fast-paced animation, flying guts, creepy underlings, and plenty of prison fights dominate the Warden’s chaotic prison in Superjail!. The blood flows like wine and the line between criminal and keeper gets blurrier by the minute.  Picture a kaleidoscope of entrails meets Jon Waters meets Shawshank damnation plus a sweaty muscle woman minus primetime sensibility. You are hereby guilty of being given what you asked for.

Join series star Chris Elliott with Jason Woliner, Andrew Weinberg, Michael Koman, Maria Thayer as they discuss the live-action comedy Eagleheart and show exclusive footage from the upcoming new season.  Produced by Conan O’Brien’s Conaco Productions and Dakota Pictures, the series premiered in February and recently wrapped production of its second season, which is slated to premiere in the spring of 2012. Every episode of Eagleheart promises violence, suspense, intrigue and copious amounts of needless bloodshed as Marshal Chris Monsanto (Elliott) blindly kicks, punches and shoots his way to what may or may not be a legitimate solution to his case.

ADULT SWIM: The Heart, She Holler

Delocated! creator/executive producer and star Jon Glaser is on hand along with Steve Cirbus, Janeane Garofalo, Jacob Kogan, Yung-I Chang  and Ali Farahnakian to reveal exclusive footage from the upcoming third season of the show premiering on Adult Swim this fall as well as answer questions about the series.  Delocated! is a live-action series about “Jon,” who after testifying against the Russian Mafia has to live undercover through the witness protection program.  After existing quietly in an anonymous suburb, “Jon” accepts an offer to participate in a reality show based on his life.  In order to protect his identity with television audiences—and more importantly, the Russian mob family the Mirminsky’s—he wears a ski mask and has his voice surgically disguised.

Adult Swim presents an exclusive screening of a never-before-aired episode of their newest animated comedy China, IL.  Frank and Steve Smith are brothers who teach in the history department of a state university in China, IL.  They also happen to be legends in their own minds who will often sacrifice facts, lessons and syllabi for the sake of being awesome.  Created by Brad Neely and produced by Titmouse, Inc., China, IL is a reverse Animal House where the teachers are crazy and the students just want to learn.  Creator Brad Neely and executive producer Daniel Weidenfeld will be on hand for a lively Q&A.

Cartoon Network is dominating Monday nights with the FUNNIEST night on television, and we’re bringing the inside scoop to Comic Con!  Join creators and talent from Adventure Time and Regular Show as they talk about how these two comedy hits came to life, screen upcoming episodes, share what’s in store for your favorite characters this season, answer questions and more!

Adventure Time introduces viewers to unlikely heroes Finn and Jake, buddies who traverse the mystical Land of Ooo and encounter its colorful inhabitants. The best of friends, our heroes always find themselves in the middle of heart-pounding escapades.   Regular Show features Mordecai, a six-foot-tall blue jay, and Rigby, a hyperactive raccoon, great friends and groundskeepers at a park whose attempts to escape their everyday boredom take them to fantastical extremes.

It’s time to “Level Up” your Comic Con experience with the WORLD PREMIERE SCREENING of Cartoon Network’s funniest original movie for the video game age!  Level Up introduces three high school gamers who unwittingly open a portal from an online game, allowing the in-game creatures and mayhem to escape into the real world!  The trio must put aside their differences and join forces to play the game for real in order to save their neighborhood (and the world!) from ultimate evil! Be among the first to see Level Up before it premieres on Cartoon Network in November, with an explosive TV series to follow in 2012.

Cartoon Network and Adventure Time will take over the registration lobby of the Jacob Javits Center at New York Comic Con from October 13 – 16, with the CARTOON NETWORK LOUNGE.  A fully-immersive experience, the CARTOON NETWORK LOUNGE will be a must-see destination for fans of the network, as they can catch up on their favorite Adventure Time episodes, grab some exclusive giveaways, play their favorite video games and so much more.  In addition to other giveaways, Adventure Time fans should stop by to get their free New York Comic Con exclusive 2″ Finn figure, while supplies last.  The toy is a limited-edition update to one of the figures from Jazwares toy line, which is currently available for sale at Toys”R”Us retailers nationwide.  Additionally, at the CARTOON NETWORK LOUNGE, fans can try their hand at three all-new video games that will be released this fall:  Ben 10 Galactic Racing, Cartoon Network Punch Time Explosion XL and Generator Rex: Agent of Providence.

Turner Broadcasting System, Inc., a Time Warner company, creates and programs branded news; entertainment; animation and young adult; and sports media environments on television and other platforms for consumers around the world.