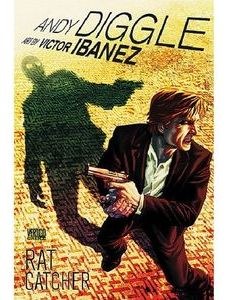 According to underworld legend, the Rat Catcher is a peerless assassin who specialises in silencing mob snitches. There’s just one problem – he doesn’t exist. Now there’s a pile of dead bodies in a burning safe house outside El Paso. The Rat Catcher has finally slipped up, and a washed-up FBI agent has one last chance to hunt him down. Follow Andy Diggle’s tale of two master man-hunters in a deadly game of cat-and-mouse, each of them hiding a secret from the other.

In Hellblazer: Pandemonuim, an alluring Muslim woman catches John Constantine’s eye and brings troubles to his doorstep: a bombing in a London museum, mysterious ancient Sumerian artifacts and a terrifying creature running rampant with renegade intentions. To save his life and freedom, Constantine embarks on a desperate trail, blazing from the back streets of London to the detainment centres and battlegrounds of contemporary Iraq. Hellblazer: Pandemonium brings original Hellblazer writer Jamie Delano together with fan-favorite artist Jock to tell a tale about war and terror in a horror story tailor-made for the 21st century.