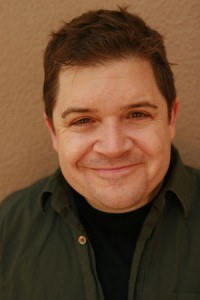 Widely known for his roles in the films Big Fan and Ratatouille, as well as the television hit The King of Queens, Patton Oswalt has been amusing audiences for decades. Now, with Zombie Spaceship Wasteland, he offers a fascinating look into his most unusual, and lovable, mindscape. Oswalt combines memoir with uproarious humor, from snow forts to Dungeons & Dragons to gifts from Grandma that had to be explained.

He remembers his teen summers spent working in a movie Cineplex and his early years doing stand-up. Then there’s the book’s centerpiece, which posits that before all young creative minds have anything to write about, they will home in on one of three story lines: zom­bies, spaceships, or wastelands. BookPeople is thrilled to host Patton Oswalt. While the talk is free to attend, if you would like a book signed it must be purchased from BookPeople. Free wristbands for the signing line will go out at 9AM the morning of the event.