STGCC 2010 Sets the Pace for Pop Culture Growth in Region

Singapore, 13 December 2010 – Pop culture is projected to grow in the region, with keen fans helping to boost the industry in Singapore and regionally. This was the view of industry professionals after the Singapore Toy, Games & Comic Convention (STGCC) 2010 ended its three-day run yesterday. Over 28,000 visitors, with a visitorship of 72,000, flocked to the show and gave the thumbs up to the quality and variety of the anime, manga, comics, toys, live performances and panel and academic discussions. 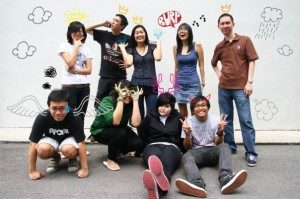 For some fans, it was a dream come true that so many of their idols were here in Singapore. Roshadiyanto Bin Ibrahim, 24, had been first in the queue for all three days, turning up everyday at 6am. He is a big Marvel fan and “I never thought that they would come to this part of the world. It’s like a dream come true!”

Followers of Cosplay have also given the thumbs up to the better quality of participation at STGCC.

Clive Lee, an experienced Singaporean cosplayer and a judge at the Cosplay@STGCC competition, said: “This competition, compared to others, has a very interesting variety of costumes making the competition very entertaining as people are looking forward to the variety of costumes they can see from the East and West. These ranged from humanoid costumes such as those of anime characters to the very elaborated mecha costumes like Gundam. Some of the finalists have even participated in world-class competitions.”

The show’s ‘East meets West’ flavour featuring personalities and artists from the US, Europe and Asia was a major draw for fans. Many agreed that the top-line content this year, like the artists, writers and illustrators from Marvel Comics and popular toy designers from Hong Kong and Japan appearing at one event made the experience unique.

There was overwhelming response to the panel sessions by Marvel Comics and Lucasfilm as well as by fan favourite Simone Legno, creator of the popular Tokidoki brand, with all the sessions filled to capacity.

And as a measure of fan adulation, fans of Japanese leading girl idol group AKB48 started queuing as early as 7am on Saturday, 11 Dec for the group’s Meet-The-Fans session at 7pm.

“STGCC is a world-class pop culture event in one of the most amazing places on Earth. I can’t wait to come back!” said Gail Simone, critically-respected comics writer best-known for her work in Wonder Woman, Secret Six and Birds of Prey.

Marvel’s international talent scout C.B. Cebulski said: “I can honestly say that STGCC 2010 surpassed all of mine and Marvel’s expectations! The level of local talent, coupled with the overwhelming fan enthusiasm here, made it one of our best convention experiences ever. And while I hope our presence here left fans thinking, “Make Mine Marvel”, I know I leave thinking, “Stay Sensational, Singapore!”

Mr Cebulski is bringing home 16 portfolios shortlisted from the 53 received to Marvel for review and their creators may have a chance to work with Marvel Comics.

Project Director Yeow Hui Leng of show organiser, Reed Exhibitions, said that the “East meets West” collaboration between Reed Exhibitions Singapore and ReedPOP in the USA brought more international participation and content from the US and Europe to the Asian audience, with some pop culture personalities making their debut in Asia.

She said: “Our decision to co-produce the show with ReedPOP – the team behind events including the New York Comic Convention, New York Anime Festival, and Star Wars Celebration – paid off in terms of the quality and variety of the show.”

Ms Yeow said that Reed will continue to invest in STGCC to develop it into one of the leading catalyst in the pop culture space, and as the platform to deliver quality content and spread the currency of cool in Asia.

STGCC 2010 also showed that there are growing opportunities for marketing the region’s pop culture creativity to the global market. This is helped by the growing popularity and easy availability of online media. International trade & consumer platforms such as the San Diego Comic Con (SDCC) and STGCC also provide comic creators, writers, illustrators a talent-spotting platform to showcase their works to regional and international publishers, dealers, distributors, manufacturers.

Locally, design schools can leverage on international events such as the STGCC to create greater opportunities for cross-cultural exchange to nurture local and regional talent.

“Singapore’s strategic position provides a strong leverage for these Asian and local artists who wish to reach out to the world and the international audience, and vice versa by giving US and European companies a robust platform to reach out to a whole new world of fans. We are confident that STGCC can become the coolest pop culture event in Asia!” said Ms Yeow.

Reed Exhibitions is the world’s leading events organizer, with over 440 events in 36 countries. In 2009 Reed brought together over six million active event participants from around the world generating billions of dollars in business. Today Reed events are held throughout the Americas, Europe, the Middle East and Asia Pacific, and organized by 35 fully staffed offices.

Working closely with professional bodies, trade associations and government departments Reed ensures that each and every event is targeted and relevant to industry needs. As a result, many Reed events are market leaders in their field.

Reed Exhibitions is part of Reed Elsevier Group plc, a FTSE-100 company and world-leading publisher and information provider. In 2009, Reed Elsevier made an adjusted profit before taxation of £1,279 million on turnover of £6,071 million.

The Singapore Toy, Games & Comic Convention combines the best of pop culture from East and West to Asia, uniting the worlds of comics, anime, toys, collectibles and games. It is the pre-eminent event in the Asian market that fits with other shows in the Reed pop culture portfolio, including New York Comic Con (NYCC), the Chicago Comic and Entertainment Expo (C2E2), Star Wars Celebration and New York Anime Festival.

STGCC will reach out to a whole new world of fans in Asia and opens a vast market with exciting opportunities for companies to break into the Asian market and/or reinforce a growing presence. Fans will experience a showcase of pop culture’s coolest and latest products, and be thrilled by personalities and characters from the worlds of superheroes, villains and realms of fantasy.

STGCC’s vision is to deliver quality content and spread the currency of cool in Asia and aims to be the leading catalyst for the pop culture industry.