Columbus, OH – December 2, 2010 – Mid-Ohio Comic Con is pleased to announce the launch of its 2010 charity auction on eBay. The auction features original art and other creative work from the guests at this year’s 30th anniversary show, many of whom made incredibly generous contributions. Of particular note, the auction includes all the giant sketches (19″ x 24″) done by artists on the Main Stage easel during the show as well as other contributed work, including sketchbooks, posters, and comics. 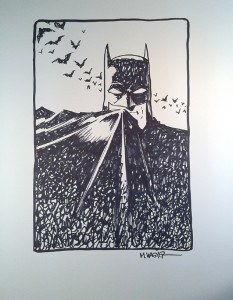 Proceeds from the auction will go to benefit the Hero Initiative, a non-profit organization that creates a financial safety net for comic creators who need emergency medical aid, financial support for the essentials of life, and an avenue back into paying work. “We are big believers in the Hero Initiative and are very pleased to see such strong support of its cause from the comic creators who donated their work to this year’s auction,” said James Henry, Managing Director of Mid-Ohio Comic Con.

Mid-Ohio-Con 2010 was held at the Greater Columbus Convention Center in Columbus, OH on the weekend of November 6-7, 2010 and featured a who’s who of creators from the worlds of comics, film, literature, and television, including featured comic guests David Finch, Adam Hughes, Frank Cho and Barry Kitson as well as featured media guests Michael Berryman Lou Ferrigno and many more. Visit Mid-Ohio-Con on Blogger for a recap of the incredible 30th anniversary show and for further information on the 2010 charity auction.