GLENDALE, Calif. – How far would you go to defend your BUTTERFINGER®? Today, Butterfinger and G4, the television network that covers the worlds of gaming, technology, animation, interactivity, and “geek culture,” announce a promotion to find the fourth member for the Butterfinger Defense League (BFDL). Two semi-finalists who best demonstrate an ability to ensure “Nobody’s Gonna Lay A Finger On My Butterfinger!” will win a VIP trip to Comic-Con International on July 21-25. The lucky semi-finalists will meet the current members of the Butterfinger Defense League, Erik Estrada, Lou Ferrigno and Charisma Carpenter, and G4’s “Attack of the Show!” hosts Olivia Munn and Kevin Pereira, during G4’s live coverage of the event. 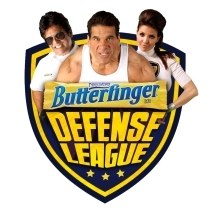 From May 13 to June 24, viewers are encouraged to submit an audition video for the Butterfinger Defense League Challenge video contest at G4tv.com/ButterfingerDefenseLeague, spotlighting a unique ability that would make them a great defender and a perfect fit for the BFDL. Submissions will be evaluated based on creativity, technical merit, and best use of a Butterfinger to determine who would best complement the existing members. The two finalists will head to Comic-Con, where “Attack of the Show!”s Olivia and Kevin along with the BFDL members will crown one finalist an honorary member of the Butterfinger Defense League and award them a $20,000 grand prize.

“After unveiling the Butterfinger Defense League, we’re now giving consumers an opportunity to really get to know our defenders through an exclusive G4 promotion,” said NestlÃ© Confections & Snacks spokesperson Tricia Bowles. “Two lucky Butterfinger fans, not only will unite with Erik, Lou and Charisma, but they’ll also appear with them at the world’s largest pop culture convention, Comic-Con International.”

Estrada, Ferrigno and Carpenter, known in the TV world as famous defenders, have joined forces to help consumers defend their bars from would-be thieves and to encourage the “Nobody’s Gonna Lay A Finger On My Butterfinger!” tagline-turned-mantra. The celebrities formed the Butterfinger Defense League after connecting through the Butterfinger Bar Insurance program, where consumers reported more than 20,000 stories of Butterfinger thefts and filed 100,000 claims online for replacement candy bars.

“G4 is excited to team up with Butterfinger for this special promotion that gives our viewers the chance to win a VIP trip to Comic-Con and the grand prize of $20,000,” said Neal Tiles, president of G4. “Attack of the Show!” hosts Kevin Pereira and Olivia Munn possess an irreverent brand of comedy that resonates with young guys. This promotion gives Butterfinger the opportunity to connect with this often hard to engage audience in a way that’s fun, clever and organic to the show.

The Butterfinger Defense League Challenge video contest ends 11:59 p.m. PDT, 6/24/10, open to legal residents of the 50 US & DC, 18 or older, subject to full rules and entry requirements at G4tv.com/ButterfingerDefenseLeague.

Additionally, a retail promotion, “The Ultimate Comic-Con Experience courtesy of Butterfinger and G4,” will be promoted in 30,000 convenience and drug stores nationwide, driving consumers to ButterfingerDefenseLeague.com, where they can enter for a chance to win a trip and VIP experience at Comic-Con and other prizes. Olivia Munn and Kevin Pereira will be featured on the Butterfinger store displays across the country, no purchase necessary. Game ends 11:59 p.m. EDT, 6/30/10.

Based in Los Angeles, Comcast Entertainment Group operates E! Entertainment Television, the 24-hour network with programming dedicated to the world of entertainment, and E! Online; The Style Network, the destination for women 18-49 with a passion for the best in relatable, inspiring and transformational lifestyle programming; G4, offering the last word on gaming, technology, animation, interactivity and “geek culture” for the male 18-34 demo; and FEARnet, the world’s premier horror and thriller destination on demand, online and on mobile devices. E! is currently available to 96 million cable and direct broadcast satellite subscribers in the United States. In 2006, E! launched the E! Everywhere initiative underscoring the company’s dedication to making E! content available on all new media platforms any time and anywhere from online to broadband video to wireless to radio to VOD. The Style Network currently counts 60 million cable and satellite subscribers and G4, the #1 podcasted cable network in America, is available in more than 65 million cable and satellite homes nationwide. FEARnet is a joint venture between Comcast, Sony Pictures Television and Lionsgate. FEARnet.com ranks as the number one horror web site and FEARnet On Demand is one of the top five VOD networks.