Phoenix Comicon Goes Off the Map! “Here There Be Authors”

James A. Owen to Attend the Phoenix Comicon

Phoenix, AZ March 14, 2010: Acclaimed children’s author James A. Owen will be attending the Phoenix Comicon. Writer and illustrator, Owen has to his credit the popular Chronicles of the Imaginarium Geographica book series, the Starchild graphic novels, and the award winning Mythworld series. 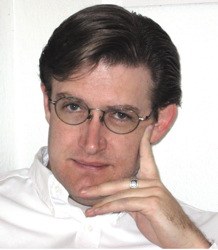 “Being imaginative is one thing, but Mr. Owen is working to reinvent mythology,” said Anabel Martinez, Phoenix Comicon Marketing Manager, “I can’t wait to hear about where his ideas come from.”

Owen has been working professionally as an illustrator and storyteller for more than two decades, which is notable mostly because he’s still comfortably in his thirties. Owen’s first great success came with the self-publication of his graphic novel series Starchild. He burst onto the prose scene with the publication of Mythworld, which achieved great success in Germany, won the 2003 Al award for Best Novel, and was nominated for the prestigious Phantastik Preis for Best International Novel, alongside books by Stephen King and Michael Crichton. The movie adaptation of his book Here, There Be Dragons, part of his latest work, the children’s series Chronicles of the Imaginarium Geographica, is being produced by Warner Brothers and will debut in 2011.

“Children love Here There Be Dragons,” says Joe Boudrie, Phoenix Comicon Programming Director, “It’ll be great to shake the hand of the man who helps so many parents like me get their kids in bed!”

Phoenix Comicon is the signature pop culture event of the southwest, presenting guests and programming for hobbyists and fans by attracting the top segments of the comics, anime, sci-fi, film, TV, and gaming industries. Entering its ninth year, Phoenix Comicon is expected to draw over 10,000+ attendees to its May 27-30, 2010 convention held at the Phoenix Convention Center and Hyatt Regency located in downtown Phoenix.